At the close out of Women’s History Month, Sales Enablement Pro highlighted women who have achieved outstanding progress in enablement over the past year.

Being in Sales Enablement can sometimes be an arduous role. It requires mental toughness, resilience, creativity, and strong change management abilities. Most are in the role because we love sales and its people. We want to make an impact and create a flourishing ecosystem of all departments well orchestrated and running synchronously. To do this, there are 3 key areas Enablement teams focus on; consistent rep performance, collaboration with revenue stakeholders, and enablement insights for impact.

“Making an impact” in Sales Enablement is easier said than done. By definition, impact can mean the action of one object coming forcibly into contact with another or having a strong effect on someone or something. Historically, there has been difficulty in showing the impact, particularly tied to revenue metrics. For years, enablers were viewed as trainers, influencers, and liaisons. More recently however, we are starting to see a real shift in how Enablement is viewed by SaaS organizations because of the efforts, like the women who made this list.

Being named a 2022 Winner of the Women Making an Impact in Enablement award was professionally, and personally, rewarding to me. Just to be on the list meant you were recognized for a multitude of impactful efforts, whether it was creating a robust onboarding program, establishing a culture of learning, creating alignment with key stakeholders and leadership, or mentorship. I’m proud that I was considered in such a high achieving group. 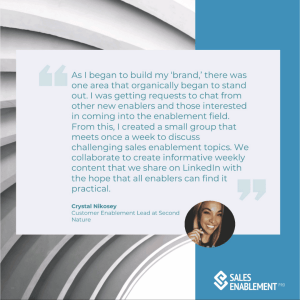 Women in sales roles are still the minority, which presents a different set of challenges for women in sales enablement, in addition to the obstacles our role itself plays. I wanted to go deeper and truly start making an impact to combat the lack of women in sales roles, particularly, Sales Enablement.

In my mind, the way to make an impact was to leave my mark, my footprint if you will. I’ve created onboarding programs and other enablement processes but the one area that brought me the most reward was mentorship. When I started creating more content and “putting myself out there” on social media, it was amazing to hear from other new enablers and those looking to make a transition into enablement!

After a couple of months of great conversation, I decided to start a group of women who wanted to also make an impact on their organizations. It was two-fold for me, I was enjoying building deeper connections with like minded women and two, when we started building content together, they were also learning from the process. I was there to guide, encourage, and support their fresh ideas and creativity.

Sales Enablement is growing exponentially and it’s finally getting the recognition it deserves, which is a seat at the table. Continued recognition of women in Sales Enablement is critical because let’s face it, in B2B sales, fewer than 1/3 of sellers are women. And in tech sales, that number dwindles to only 1/4. Women hold just 12% of coveted top sales positions. It’s also imperative for the growth of the function and to also foster a culture of diversity in sales leadership.  I’d love to hear what your organization is doing in Sales Enablement and the challenges you have, feel free to connect with me on LinkedIn and continue the conversation.

Crystal is the Customer Enablement Lead at Second Nature

How to Build Predictability in 2023 SaaS Sales

How to Build Predictability in 2023 SaaS Sales We've just entered 2023, which is always...

Second Nature just keeps on getting better! Here are four new features that make it...